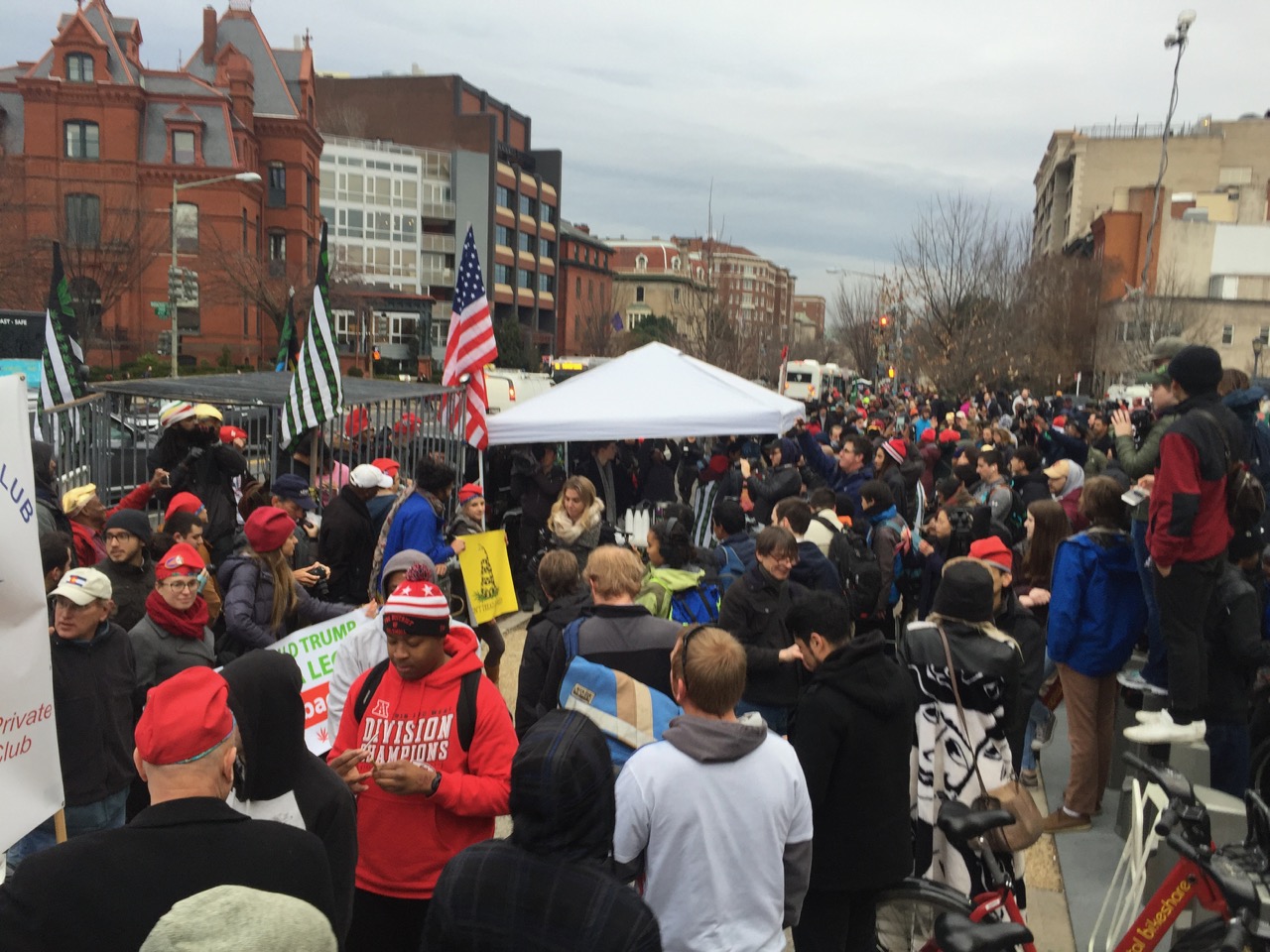 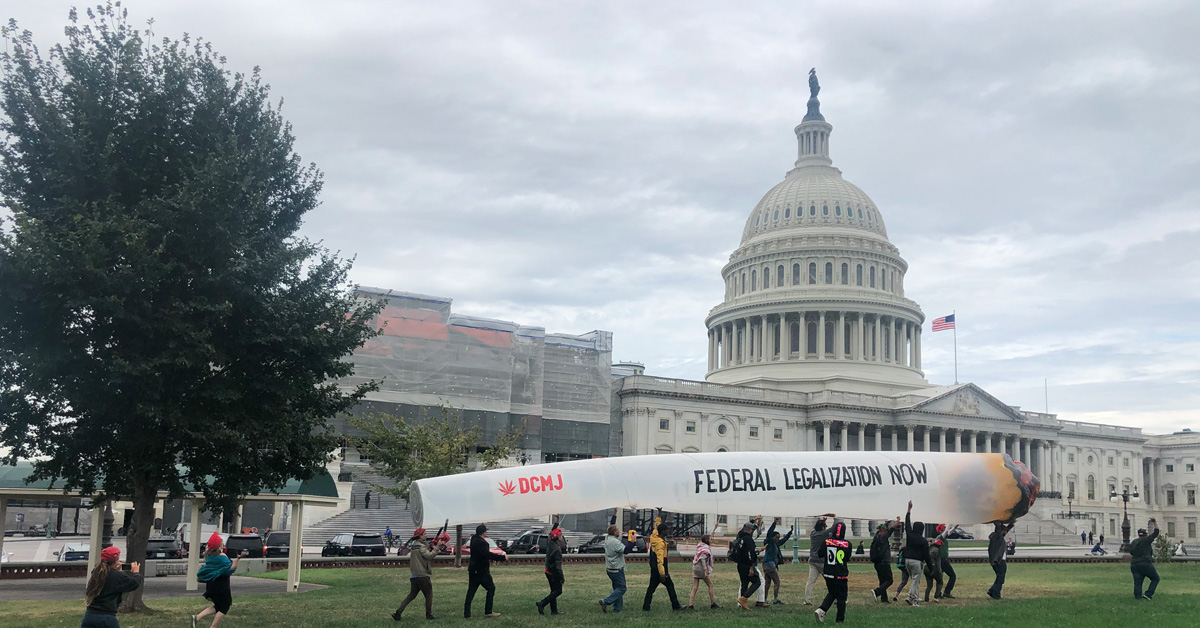 It’s that time of year for a holiday party! But alas, due to the coronavirus pandemic, we are not going to celebrate in person this year. Instead, we are hosting a special 420 Zoom Sesh next Wednesday (12/16) and you are invited!

The draft agenda for the dankest holiday Zoom ever is pretty short: recap DCMJ’s 2020 activities, provide some updates on Initiative 81, discuss DCMJ’s 2021 plans, and fill our Zoom screens with as much smoke as possible before the fire alarm goes off.  The special 4:20 Zoom Sesh will commence promptly at 4:19pm, so don’t be late!

To join the 420 Zoom Sesh, please click here to register. We will send out a reminder email next Wednesday morning to everyone and the passcode to everyone who registered about one hour before the 420 Zoom Sesh begins. By this point in 2020, you probably have Zoom installed on your computer or phone. If not, please download it here. Questions? Email 420ZoomSesh@DCMJ.org and we’ll do our best to answer. 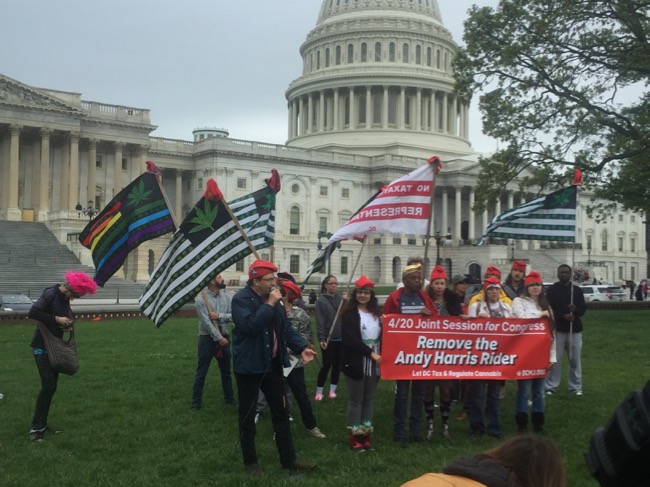 With the coronavirus pandemic preventing in-person gatherings, DC Marijuana Justice has chosen to pause our monthly meetings and scale back our regular activities for the foreseeable future.  We remain committed to reforming the cannabis laws in the District of Columbia and across the United States. Please sign up for our email list so you will be kept abreast of any important developments. 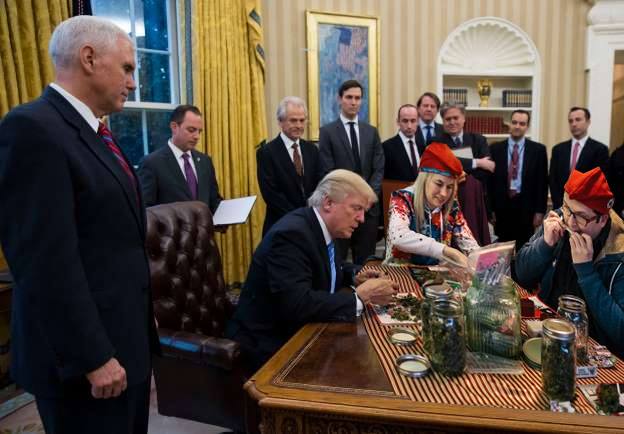 Join us for our monthly planning meetings in 2020! 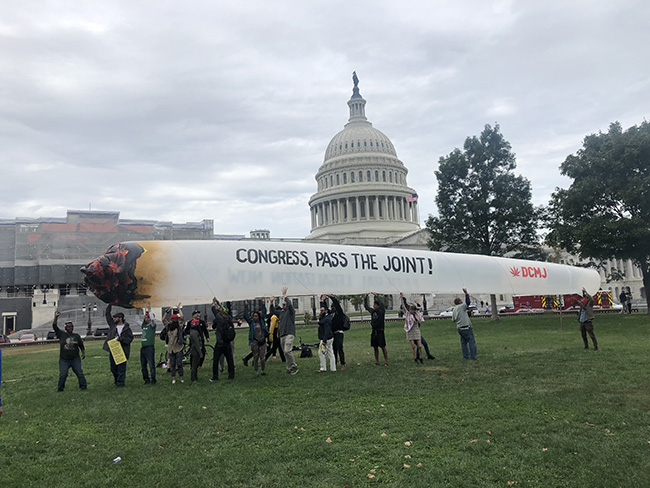 On Tuesday, October 8, 2019, members of DCMJ, MDMJ, VAMJ, and COMJ descended upon the East Lawn of the U.S. Capitol to demand Congress pass meaningful cannabis reform laws. Below are photos & videos from the demonstration which are available for unrestricted use by the media. END_OF_DOCUMENT_TOKEN_TO_BE_REPLACED

We recently got news that the Senate’s budget for the District of Columbia still contains the tyrannical Harris Rider. This means that DC’s federal budget will go to conference committee in order to hammer out the differences between the House version (which has the Harris Rider removed) and the Senate version of the federal budget. We also have word that House leadership will not seek the removal this rider in conference committee. This means DC is being thrown under the bus again and will likely allow the Harris Rider to remain in the budget for the next year. This also means that both Councilmember Grosso’s legalization bill and the Mayor’s legalization bill will not be able to move forward for at least another year!

WE DON’T HAVE TO SIT QUIETLY AND LET CONGRESS PUT OFF MARIJUANA LEGISLATION!

Join us on the East Lawn of the U.S. Capitol at 11:30am on Tuesday, October 8, 2019 to demand Congress pass meaningful cannabis reform legislation! We are calling the demonstration,”Congress, Pass the Joint! Rally at the U.S. Capitol.” Please join us during your lunch break!

But it’s not only DC residents getting thrown under the bus. It’s EVERYONE IN THE UNITED STATES. More than half the states in the United States have passed laws allowing some form of medical cannabis, but Congress has refused to legislate. The entire West Coast of the U.S. has legalized cannabis, but adults can’t legally take their cannabis across state lines.  Worse, right now there is an epidemic of toxic THC cartridges plaguing the United States, but instead of passing meaningful legislation to regulate cannabis and cannabis products, Congress has done what they are really good at: nothing. Remember how during alcohol prohibition there used to be stories of people going blind and/or dying because of knock-off alcohol? Sounds like history is repeating itself thanks to congressional inaction. This week the House passed the banking bill, which lays the foundation for legal cannabis businesses, but the Republican-controlled Senate has yet to take it up. Congress will continue to do nothing unless we demand action! What are they waiting for? CONGRESS, PASS THE JOINT!

We have Congresswoman Eleanor Holmes Norton (D-DC) confirmed to speak and we will reach out to other members of Congress, the Mayor, and cannabis-friendly DC Councilmembers. Out of respect to the Congresswoman, this will be a NO SMOKING / NO CONSUMPTION demonstration. We do not anticipate any arrests and have applied for permits from the U.S. Capitol Police (a first for DCMJ!).

WASHINGTON, DC – Leading cannabis advocacy and educational organization DCMJ (District of Columbia Marijuana Justice) and its sister organizations will announce Tuesday it will target the Senate in a new front in its effort to get Congress to end its obstructionist policies toward passing legalization legislation.

To hammer home its message, DCMJ will break out its giant 51-foot inflatable joint at the lunchtime rally outside the U.S. Capitol, dubbed “Congress, Pass the Joint.” The rally marks the first time DCMJ will be joined by affiliates COMJ, MDMJ and VAMJ (Colorado, Maryland and Virginia, respectively) in a multi-state effort to pressure the Senate to:

• Pass the SAFE Banking Act (S.1200) that would open up the federally regulated banking system to the cannabis community

• And ultimately pass the Marijuana Justice Act (S. 597 / HR 1456) that will fully legalize cannabis in the United States

“All the evidence points to the Senate majority leadership blocking cannabis legalization laws at this point,” said Adam Eidinger, of DCMJ and Brother Davids, an environmentally conscious non-profit cannabis company. “To demonstrate we are serious about ending the gridlock, we will target vulnerable Republican senators in the 2020 elections from states that have passed legalization laws.”

DCMJ and its sister group MDMJ are not new to politically targeting anti-cannabis lawmakers. In 2018, the community cannabis groups put “boots on the ground” to campaign against Rep. Andy Harris Rider (R-MD). Political professionals who credit MDMJ with indirectly helping to defeat former House Rules Committee Chairman Pete Sessions (R-TX) last year have lauded the anti-Harris campaign. Tens of thousands of dollars in prohibitionist money that went to Harris and Harris-supported third party organizations was diverted from Sessions, money he badly needed in that closely contested race.

“It was fear that led to the poor decision by some Republicans to fund Harris over Sessions. It was MDMJ’s activity on the ground that put the fear into the GOP,” says Kris Furnish, cofounder of MDMJ, “We intend to replicate that effort in states like Colorado and Maine between now and November 2020.”

AJ Dawson, founder of Colorado Marijuana Justice, noted that it’s time to go after lawmakers who claim to be pro-legalization but have done little more that lip service to curb the prohibitionist policies imposed by obstructionist Senate GOP leader Mitch McConnell (R-KY).

“We can no longer accept the behavior of the enablers who allow McConnell to block legalization bills from even coming up for a vote by the full Senate,” Dawson said. “That is the message we will send to Sen. Cory Gardner (R-CO): Get your party in order. It’s time for action not just words.”

Eidinger called McConnell’s legalization stonewalling in the Senate “completely out of touch with the majority of the mainstream in the U.S,” and emphasized there is a new economy that is languishing because of the Senate’s inaction.

“Sen. McConnell needs to realize he is holding up job-creation bills by blocking cannabis legislation,” Eidinger said. “This is an industry that would flourish in his beloved Kentucky, but he’s stuck in some time bubble that doesn’t allow him to have a clear vision forward.”

Confirmed speakers will include Congresswoman Eleanor Holmes Norton (D-DC), along with the leaders of the legalization groups.

DCMJ was founded in 2013 to advocate for cannabis users, growers, and their families. To learn more about DCMJ visit www.dcmj.org or view the demonstration’s Facebook Event Page.