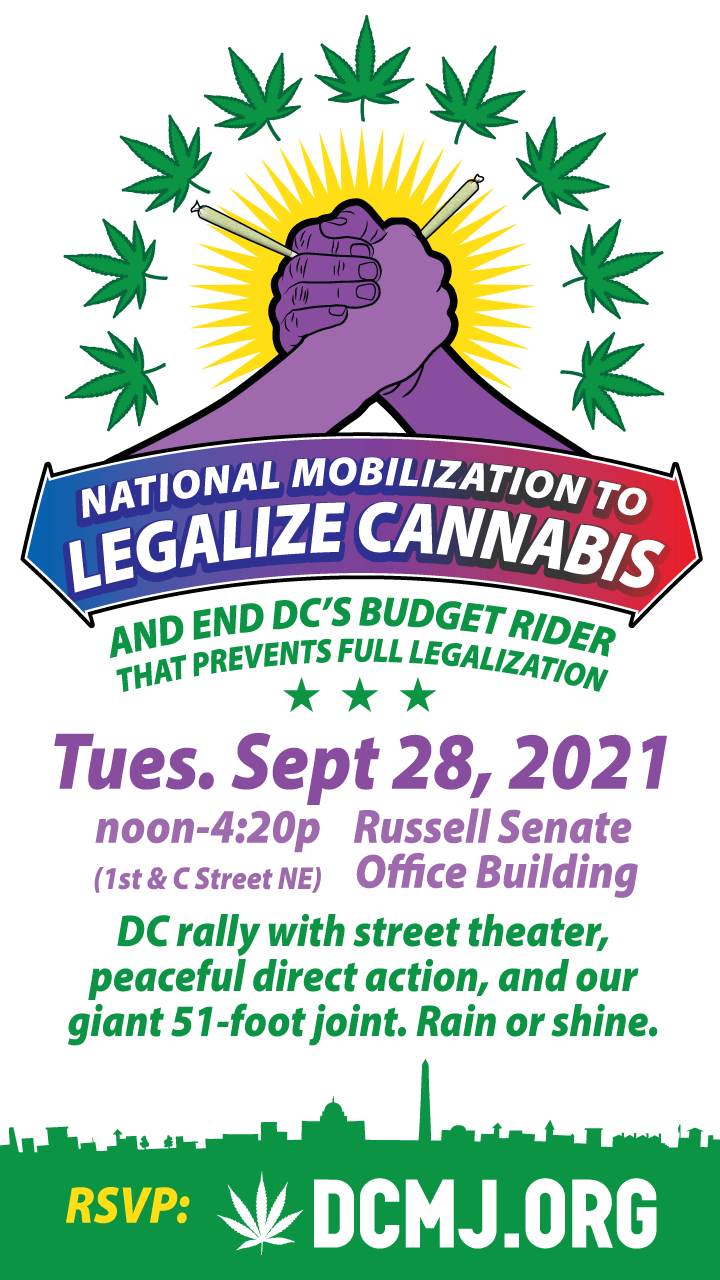 Event Will Focus on Failure by Congress to Legalize Cannabis Under a Law that Would Guarantee Criminal Justice Reforms and Restorative Justice Measures and Provide Equal Opportunity and Access for Americans to Participate in Cannabis Commerce and Consumerism.
HASHTAG: #VoteAndWeedEmOut

DCMJ video releases for news media use and distribution (volunteers gathered for preparation and sign-making ahead of tomorrow’s rally; brief remarks by DCMJ co-founder Adam Eidinger):

WASHINGTON, DC – Advocacy and education organization District of Columbia Marijuana Justice (DCMJ) will rally Tuesday (Sept. 28, 2021) on Capitol Hill to pressure Congress to stop stalling and pass a cannabis legalization law that would enact sweeping criminal justice reforms; level the playing field for minority and women entrepreneurs that want to enter the cannabis industry; and allow the craft cultivation of cannabis in the privacy of American homes.

Dubbed the “National Mobilization to Legalize Cannabis,” DCMJ and its supporters will also use the event to demand Congress to set free the will of the voters in D.C., who have been handcuffed by a Maryland congressman’s misguided war on legalization. Congress has allowed the Harris Amendment, imposed by Rep. Andy Harris (R-MD), to prevent D.C. local government from allowing the legally taxed and regulated sale of adult use cannabis, even though it was approved by the voters in 2014.

“How many successful legalization ballot initiatives and legislative victories in the states will it take for Congress to get in step with the will of the American people?” questioned Adam Eidinger, co-founder of DCMJ. “Congress stalls, makes excuses for doing nothing and refuses to acknowledge that the federal criminalization of cannabis is an injustice used to oppress Americans, not improve anyone’s lives.”

Eidinger noted, “Congress is caught up in reefer madness. The Controlled Substances Act has criminalized Americans for 50 years and still counting. Sadly, most members of the House and Senate are aware that as long as they ignore cannabis legalization they are ruining the lives of non-violent cannabis users while aiding and abetting the illegal cannabis underground.”

Although the measure known as the Harris Rider specifically overrides and ignores the will of D.C. voters, who approved adult use cannabis legalization in 2014, it is a case study in the irrational and ineffective approach Congress has for too long has embraced nationally.

“No one has done more to prop up the illegal cannabis underground than Congressman Andy Harris,” said Nikolas Schiller, co-founder of DCMJ and affiliate New York Marijuana Justice. “Andy Harris is the toast of the underground cannabis cartels that operate in the MidAtlantic region thanks to his continuing misguided and short-sighted stunt to try to suppress the legal sale of cannabis in D.C.”

DCMJ activists will gather at noon Tuesday (tomorrow) at the Russell Senate Office Building at 1st and C Streets, NorthEast. DCMJ will have its inflatable 51-foot joint with a twist – inside the inflatable will be D.C. residents, who will emerge from the joint in prison garb to symbolize the non-violent Americans incarcerated on marijuana convictions, as well as highlighting the D.C. adult use cannabis law imprisoned by the Harris Amendment.

Cannabis legalization is a cornerstone for comprehensive criminal justice reform, including wiping the slate clean of past cannabis convictions with restorative justice measures, ending taxpayer-funded prison overcrowding by releasing non-violent cannabis users, and refocusing law enforcement resources on preventing violent crimes. Cannabis laws have been used as an unscrupulous tool in the racial profiling of Black, LatinX and Indigenous people.

DCMJ is committed to the health and safety of all Americans. Event organizers has asked any participants that show up to please wear masks and urged those who plan to attend the demonstration to get vaccinated against COVID-19 before Sept. 28. “We laid down our marker on April 20th when we launched the ‘Joints for Jabs’ vaccination incentive project that has since moved to cities and states around the country,” Eidinger said. “Any adult who showed us their proof of age and vaccination card on the 4/20 holiday received a free joint courtesy of legal craft cultivators in the District of Columbia, who donated their cannabis for the cause. It was a ‘thank you’ to those who have been vaccinated.”

Since its founding in 2013, DCMJ has led the nation in creative and high-profile cannabis reform activism. After introducing and passing DC’s Initiative 71 in 2014, which voters legalized the possession and cultivation of cannabis, DCMJ organized three large seed giveaways that provided all adults and Congressional staffers the means to grow cannabis for themselves, deployed giant 51-foot inflatable joints outside the Capitol, the White House, the 2016 Democratic National Convention in Philadelphia, Times Square in New York City, the 2016 Presidential Debates, Annapolis Statehouse and Boston’s Freedom Rally, as well as distributing more than 10,000 joints of District of Columbia homegrown cannabis at the Inauguration of President Donald Trump, and attempting to distribute 1,227 joints at the congressional “Joint Session” in 2017, where U.S. Capitol Police unlawfully arrested seven DCMJ activists (All charges were dropped the following day). In 2021, DCMJ conceptualized and launched the “Joints for Jabs” coronavirus vaccination incentive program that was spontaneously adopted around the U.S., including by the State of Washington. About 8,000 free joints were given to adults in D.C. and Manhattan in exchange for their getting vaccinated. Also in 2021, DCMJ was behind The Great Commonwealth Cannabis Seed Share, collecting and distributing about 20,000 seeds on the first day of legal home craft cultivation in Virginia. In 2018, 2019, and 2021, aligned organizations MDMJ, VAMJ, COMJ, and NYMJ were formed to advocate for cannabis reform in Maryland, Virginia, Colorado, and New York. DCMJ demands cannabis be removed from the Controlled Substances Act and all Americans are given the right to grow cannabis in the safety and privacy of their homes.