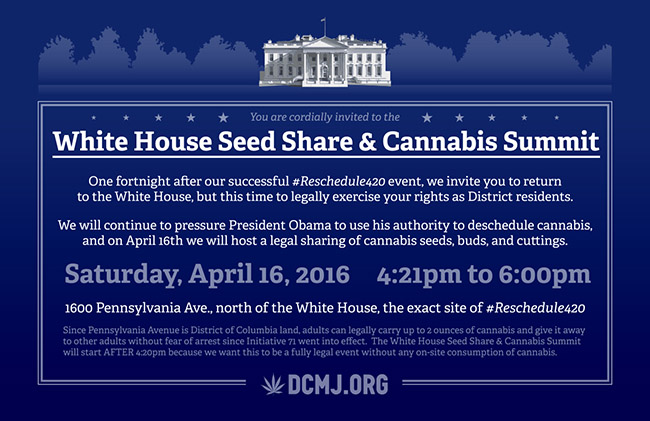 can you buy Ivermectin over the counter We’re going back to the White House on Saturday, April 16 to hold the:

Armyans’k WHO – Seed Seekers, Seed Sharers, Master Growers, Closet Gardeners, and Cannabis Advocates
Mint Hill WHAT – The legal sharing of cannabis seeds, buds, and cuttings and a discussion about the immediate descheduling of cannabis
gay seznamka hudlice WHERE – On Pennsylvania Ave., north of the White House, exactly where #Reschedule420 took place
WHEN – Saturday, April 16 from 4:21pm to 6:00pm
WHY – President Obama has failed to respond to our request to hold a cannabis summit and to provide cannabis advocates with seeds, buds, and cuttings

Since Pennsylvania Avenue is District of Columbia land, adults can legally carry up to 2 ounces of cannabis and give it away to other adults without fear of arrest. The White House Seed Share & Cannabis Summit will start AFTER 4:20pm because we want this to be a fully legal event without any on-site consumption of cannabis.

As you may know, last weekend’s “smoke-in” ruffled the feathers of many mainstream cannabis advocacy groups because we openly broke the law by consuming cannabis in public.  Since we do not plan on breaking any DC laws on April 16, we are formally inviting all drug policy reform groups to join us for the Cannabis Summit that President Obama refuses to have with us.

History shows us that in order to change the laws, we must be persistent and that means more actions are needed. We all know the Emperor Wears No Clothes, but lighting up near a 51-foot inflatable joint is not going to deschedule cannabis overnight. It’s going to take ALL OF US to convince President Obama that the time for action is NOW!

Some of the press have reported that President Obama said that we should focus our efforts on Congress because they have the power to deschedule cannabis. Unfortunately nearly all of the media fails to mention that we, the cannabis activists of the District of Columbia, do not have Senators or a voting Representative to focus our efforts on. Thanks to the 23rd Amendment to the U.S. Constitution, we have only the President to hold accountable, and accountable we’ll continue to hold him!

We do not expect the White House Seed Share & Cannabis Summit to be as well-attended as Reschedule420 because we are not aware of many groups of out-of-town activists who plan to join us. But we expect it to be just as awesome (minus the 51′ joint) and we know that we must all continue to put pressure on Obama to use his authority to deschedule cannabis NOW!

PLEASE NOTE: DCMJ is not giving out seeds, buds, or cuttings, rather volunteer cannabis advocates who support our efforts will be the generous ones this Saturday. Please read over the rules we drafted last year for the previous seed share.

As you know, any adult in Washington, DC can carry up to 2 ounces of cannabis on them on non-federal land, so the White House Seed Share & Cannabis Summit is open to all adults.  Lawful sharing of cannabis can only take place between adults 21 and older. We urge you to not feel embarrassed to ask someone who looks under 21 for their government-issued ID before sharing with them.

In regards to the sharing of cuttings, we define a cutting as a branch of a female cannabis plant that weighs under 1 ounce and is not in a growing medium (soil, perlite, rock wool, etc.). A clone is a cutting that is in a growing medium and these can be considered plants, which are not allowed outside of your home. We suggest preserving your cuttings by placing them in a ziplock baggie with water and when you get home you should start the rooting process in the growing medium of your choosing. The last thing we want is for cannabis growers to be detained or arrested for accidentally bringing rooted plants or clones.

We will have the sound wagon with us so seed sharers can talk about their their seeds, as well as why they believe Obama should immediately deschedule cannabis.  We look forward to your sharing of stories, seeds, buds, and cuttings this Saturday!