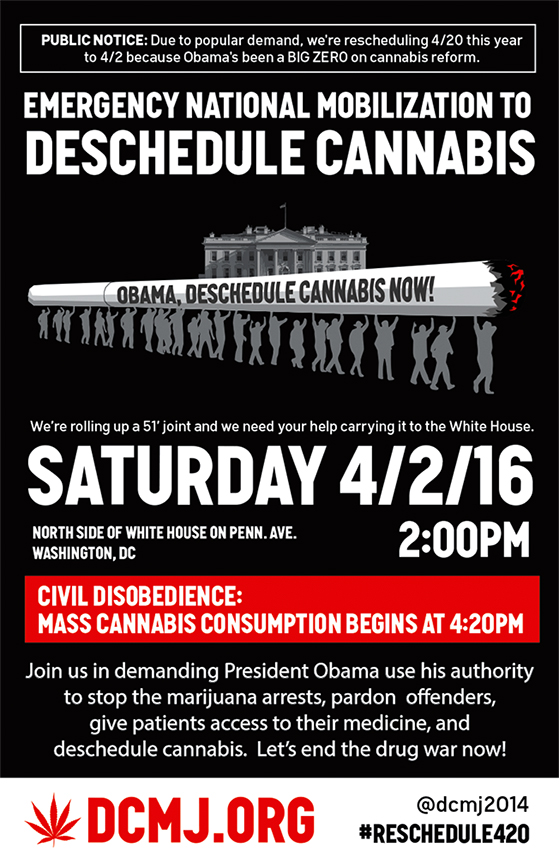 PUBLIC NOTICE : Due to popular demand, we’re rescheduling 4/20 this year to 4/2 because Obama’s been a BIG ZER0 on cannabis reform.

President Obama has the power to use his authority to reschedule cannabis. But recent reports have shown that he has no plans to change the status quo and, frankly, that is just pitiful.

While we have been able to drastically reduce arrests for marijuana possession in the District of Columbia, millions of Americans across the United States are not so lucky. As long as cannabis is treated in the same category of drugs as heroin, with no accepted medical use, police will continue to arrest & lockup our brothers and sisters.

We will gather outside the White House at 2:00pm on Saturday, April 2 and have speakers from DCMJ and other cannabis advocacy groups. At 4:20pm there will be a mass-consumption* of cannabis. We will not be seeking any type of permit from the National Park Police because it is our constitutional right to peacefully gather and demand Obama stop being hypocrite. He smoked cannabis and became the president of the United States, and while he might think cannabis is a bad habit, does he seriously think it’s on par with heroin, nicotine, or alcohol?

Some people think we should not protest President Obama in an election year. But if not now when? Let’s make the rescheduling of cannabis a campaign issue now!

This is a challenge to the frontrunners. Will Donald Trump federal legalization? Has Hillary evolved long enough on the issue of cannabis to support federal legalization? Will Bernie Sanders take a national legalization approach instead of a state by state approach? But most importantly, does Obama want a legacy of being the president who finally ended the failed war on drugs? We’re rescheduling 4/20 this year to find out. Join us!

What you can do:

* A 4:20pm Mass-Consumption of cannabis includes smoking, vaping, but also eating. Do you think the National Park Service will go after your brownies, gummies, rice crispy treats, or cookies? Doubtful. As we #Reschedule420 this year, we encourage people who do not want to smoke or vape their cannabis to eat it as a form of protest. So in the misquoted words of Marie Antoinette, LET THEM EAT CAKE! 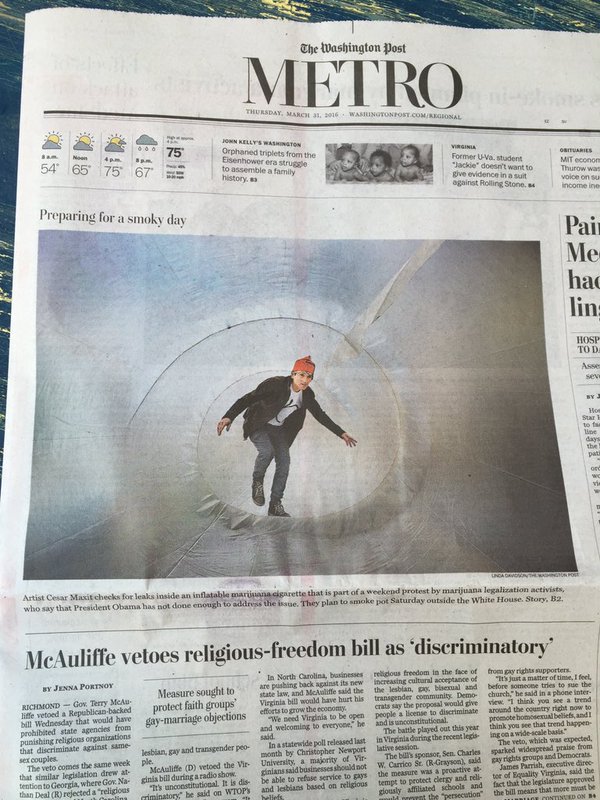 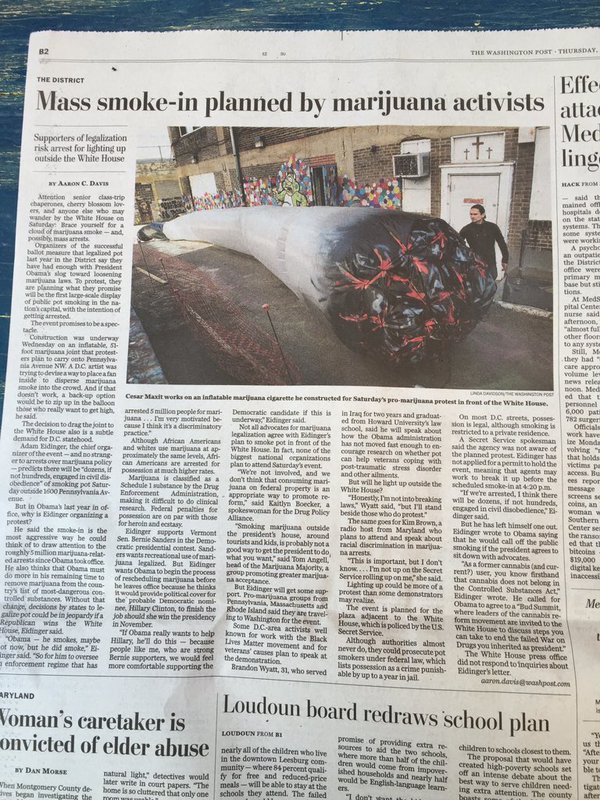 Did you see yesterday’s Washington Post? The 51 foot joint was on the front page of the Metro Section! What does that mean? We have the opportunity to show America an amazingly positive display of non-violent civil disobedience. It also means we need to ensure that everyone knows EXACTLY what is going down before we’re lighting up.

We are meeting at the corner of 15th & Pennsylvania Ave NW at 1:45pm and walking Cesar Maxit’s 51 foot joint a half a block down Pennsylvania Ave. At 2pm our curated open mic begins and will be lead by MC Adam Eidinger. We have various speakers from different movements confirmed to show up but we encourage everyone reading this to consider making brief remarks if their is time.  At around 4:15pm we will make announcements about the civil disobedience.  At 4:20pm there will be a blessing and many of us will engage in civil disobedience by consuming cannabis.  Shortly afterwards, we’ll part ways, go home, and watch ourselves on the evening news…. SEE YOU THERE!

1) NO ARRESTS – After consuming cannabis as an act of civil disobedience, we march down Pennsylvania Ave. toward 17th Street for a victory lap!
2) ARRESTS OCCUR AND PEOPLE ARE RELEASED QUICKLY – After paying a small fine ($100 or less) people are released Saturday evening.
3) ARRESTS OCCUR AND PEOPLE ARE DETAINED UNTIL MONDAY – After going before a judge, you are released Monday afternoon and will likely have to return to court at a later date.

DO – Invite your friends!

DON’T – Consume cannabis (smoke, vape, eat, etc.) until 4:20pm. The fastest way to get arrested is to be the only person using cannabis. If you see someone consuming cannabis, politely suggest they relocate to a different area or refrain until 4:20pm.

DO – Help hold the 51 foot joint! You know that you want to take a selfie holding the biggest joint ever brought to the White House!

DON’T – Swear or say offensive things to the general public.

DO – Listen to the various speakers. You will hear some amazing stories about how cannabis has impacted the lives of your fellow Americans. Please show speakers respect by engaging in discussions away from the sound system.

DON’T – Be rude to tourists, strangers, or other cannabis activists. One of our biggest strengths is that we are united in the belief that the federal laws related to cannabis need to be changed. You may meet people who have different political viewpoints than yours and it’s important that you know how to agree to disagree.

DO – Bring your government-issued ID. In case anything happens, it’s always good to be able to prove who you are.

DON’T – Be disrespectful to the police! Treat them like you would like to be treated yourself. Do not call them names! If you engage in civil disobedience and the police arrest you, do not fight back or you might end up with a assault charge.

DO – Be peaceful! Have fun! Know that you are making history! Don’t let the detractors who think doing nothing will somehow change something.

DON’T – Forget that the area around the White House is federal property where Ballot Initiative 71 does not apply. So don’t bring large amounts of any “illegal” substances or paraphernalia such as chillums, bowls, dugouts, bongs, etc. We recommend joints, vapes, and edibles for those who are engaging in civil disobedience.

DO – Bring $50 to $100 cash if you plan on engaging in civil disobedience. Often the police offer a “Post and Forfeit” option, where you may simultaneously post and forfeit an amount as collateral (which otherwise would serve as security upon release to ensure the arrestee’s appearance at trial) and thereby obtain a full and final resolution of the criminal charge. Since there are so many arrests in DC every year for civil disobedience, the post & forfeit option is very common, so bring extra cash with you.

DO – Be educated on why you are demonstrating. You may be asked by a reporter for your comments. Do you have something ready to say? It’s OKAY to say nothing! But it’s best to read up on why the Controlled Substances Act needs to be changed in regards to cannabis.

DON’T – Act like a fool! We expect national & international media to be present, so do your best to represent cannabis community.

DO – Understand that if you choose to engage in civil disobedience, you might be in DC jail until Monday.

DON’T – Try to find parking nearby! Take the Metro, Bus, ride your bike, or walk! But there is garages & metered parking nearby, but it’s going to cost you a lot!

DO – Know that it is YOUR RIGHT TO PEACEFULLY ASSEMBLE! You are not risking arrest by showing up, rather you risk arrest by engaging in civil disobedience.

DON’T – Expect the world to change over night.

DON’T – Forget to write 202-733-4640 with a permanent marker on your arm. If you engage in civil disobedience and get arrested, call 202-733-4640 when you are at the jail. We’ll have someone helping with jail support. We want to know who you is arrested and when they are getting out.

MOST IMPORTANT DO – BE COOL!! Always stay calm. Change happens at the speed of protest, so know that after the demonstration, our efforts will go on! 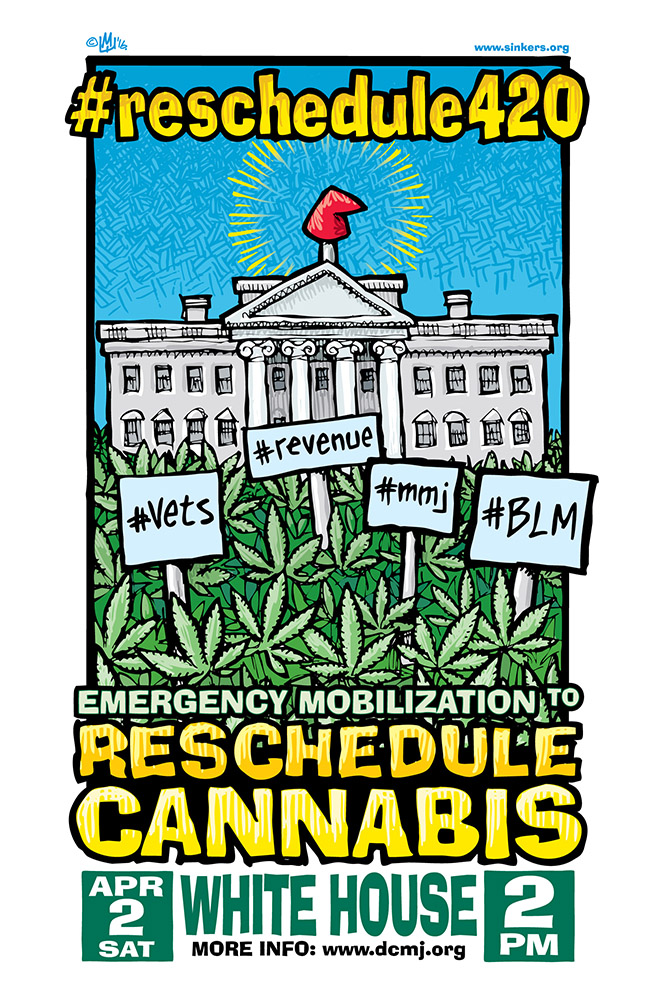 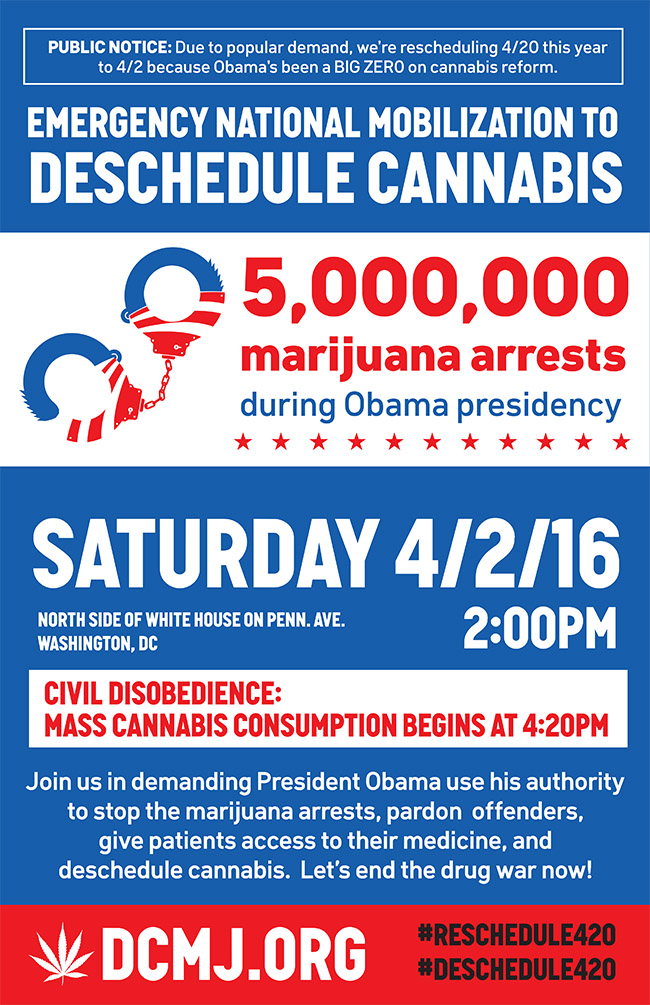 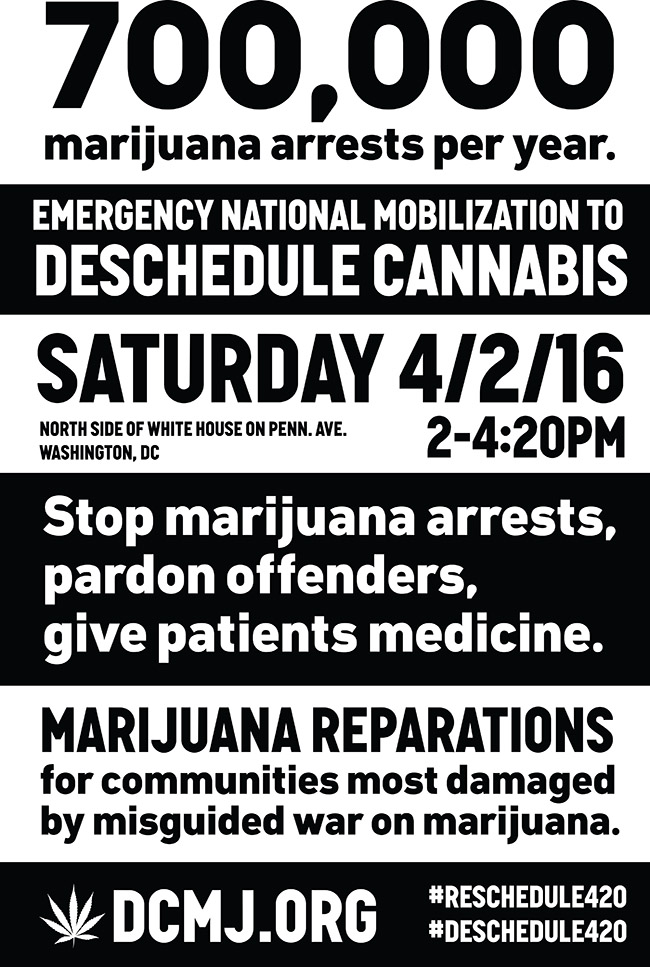 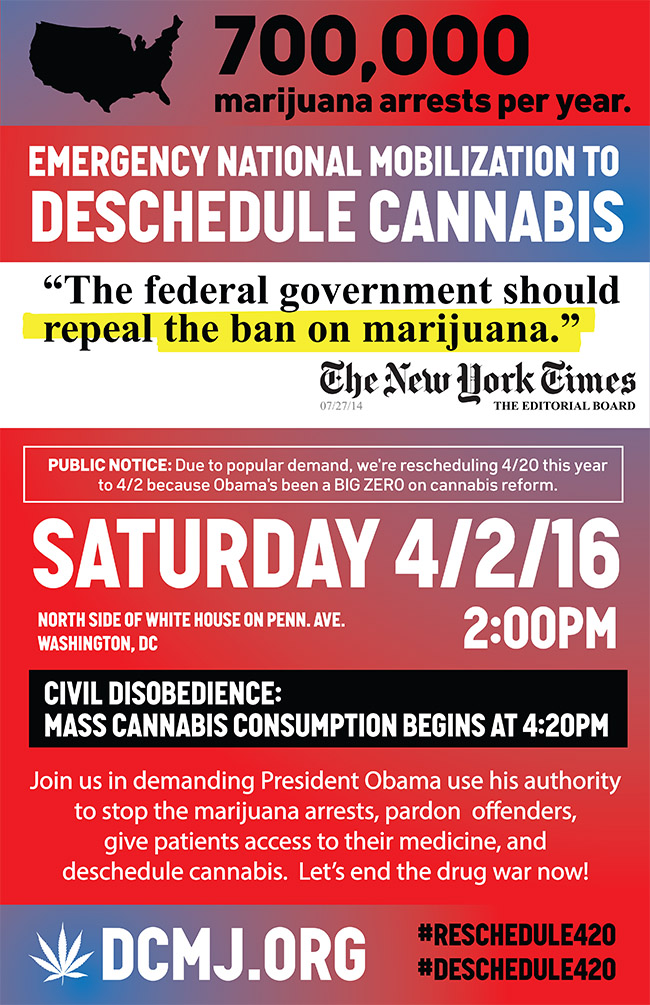