DCMJ Statement on Arrests at Smoke-In on Capitol Steps

WASHINGTON, D.C. — DCMJ, the advocacy and educational organization that spearheaded Initiative 71, issued the following statement regarding #Reschedule420 Smoke-In at the Capitol on April 24, 2017.

Statement from Nikolas Schiller, co-founder of DCMJ:
Cannabis legalization is a bipartisan issue that Majority Leader Mitch McConnell, Speaker Ryan, and Congress can no longer afford to ignore. There is overwhelming support for ending cannabis prohibition, and 71% of Americans are against a federal crackdown.

This is a peaceful and responsible movement that is demanding Congress to stop cherry picking when to respect states rights. We want Congress to do their job and respect the will of the voters.

Unfortunately, the reality is that sometimes our laws don’t match what the American people want. We have many examples of this throughout our nation’s history. It is time Congress ends unjust laws that ‘criminalize’ tens of thousands every year. However, these injustices cannot stand.

We will continue our work and we not be silenced. It’s high time, Congress get in line with the overwhelming number of citizens who support legalizing a plant scientifically far less harmful than alcohol.

Support for Ending Cannabis Prohibition Has Never Been Higher
According to an October 2016 Gallup poll, American support for legalizing cannabis is at 60 percent, the highest it’s been in 47 years, and a 2015 Harris poll found a staggering 81 percent of Americans support legalization of cannabis for medical use. Seventy-one percent of Americans across party lines and age groups oppose a federal crackdown on state-legal programs. Today, there are 29 states and the District of Columbia that have chosen to create regulated cannabis programs, including four of the five most populated states in the nation. More than 20 percent of the U.S. population lives in states that allow adults 21 and older to legally consume cannabis, and more than 60 percent of the population lives in a state where medical cannabis access is legal. 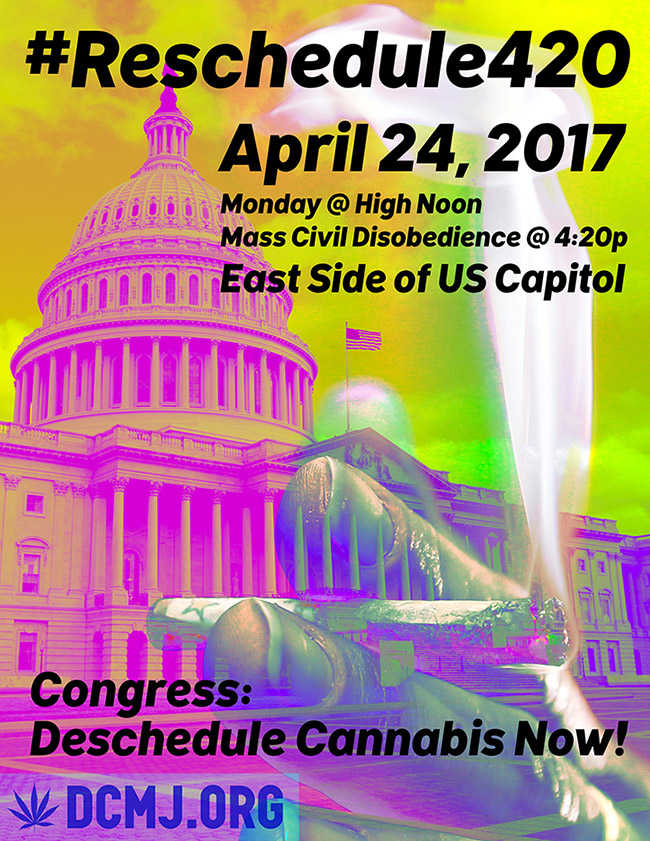 In case you missed it, at yesterday’s White House Press Briefing spokesman Sean Spicer finally answered a question about cannabis. His response was not good. Please watch it for yourself.

New date & time: Gather at HIGH NOON, on Monday, April 24, 2017 with mass civil disobedience at 4:20pm
New location: The east side of the U.S. Capitol

This is a National Call to Action!
No More Waiting!! Congress Deschedule Cannabis NOW!

While other marijuana advocacy groups are issuing statements, we are calling on them to join us in a national demonstration on April 24, 2017. The powers that be ignore our statements and petitions but they cannot ignore us when we gather in large numbers. Therefore we need every cannabis supporter to join us at the Capitol!

We are urging those of you reading this who live outside of DC, to reschedule your calendar, come to DC, and smoke out the office of your member of Congress. Locally, we have our eyes set on a few members of Congress that need to smell the change we desire.

Congress is not listening to us and they need to be reminded that America’s cannabis laws need to be changed NOW. Not with some lame bandaid of a law that lets states do their own thing or rescheduling that prohibits plant access, but a comprehensive law that allows you to take your cannabis in a car from DC to California without fear of arrest.

Cannabis needs to be fully removed from the Controlled Substances Act, not pushed down to Schedule II into the hands of Big Pharma!

PLEASE NOTE: Possession of cannabis on the Capitol grounds is not legal. Consuming cannabis anywhere in DC outside of a home is not legal either. But sitting quietly while the Trump administration rolls back our freedoms is not something we plan to do. We need to be loud and proud!

The Inaugural #Trump420 showed that cannabis reform is not a partisan issue. There are millions of Trump supporters who support the full legalization of cannabis, and we are encouraging people of all political stripes to join this national mobilization!

Yesterday’s poll showed a majority of Americans want cannabis reform. But unless we loudly demand it, we are going to get stuck with another shitty law that benefits corporations and not the American people.

We expect arrests to take place on Reschedule420 this year, but we know that our cause is just. We know that the best way to make America great again is not enforcing the outdated Controlled Substances Act, but providing Americans the liberty to choose cannabis for relaxation, enjoyment, and medicine. 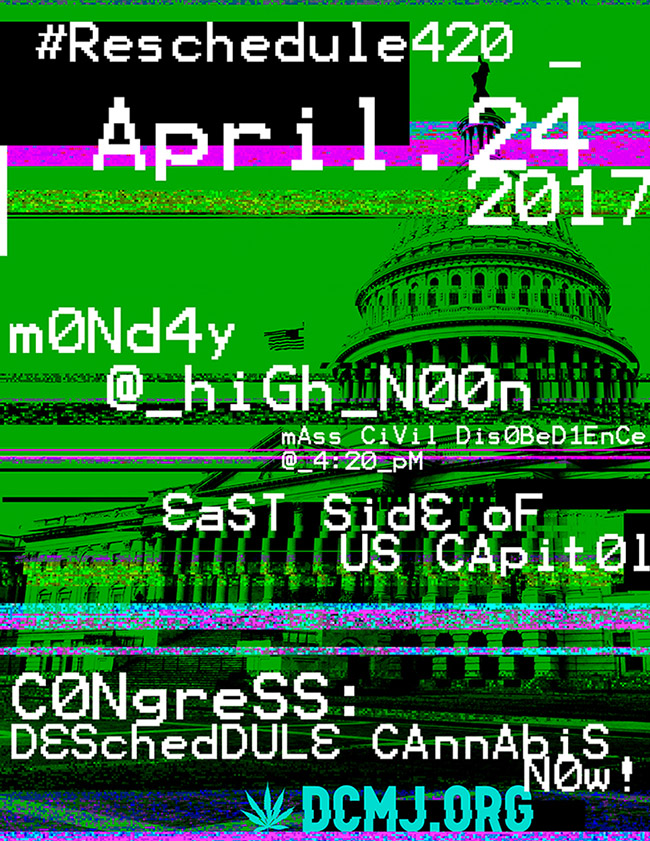 Legalization Advocates to Lead #Reschedule420 Demonstration to Call on Congress to End the War on Cannabis, Uphold Rohrabacher–Farr Amendment, and Respect DC and States Rights

WASHINGTON, DC – DCMJ, the organization that spearheaded Initiative 71, which legalized cannabis in the District of Columbia, will lead a #Reschedule420 Smoke-In at the Capitol on Monday, April 24th. The demonstration, which is scheduled to take place four days after DCMJ’s 1st Annual Congressional #JointSession—a free cannabis giveaway—will urge Congress to support Ending Federal Marijuana Prohibition Act of 2017 (H.R. 1227), which would put an end to the federal prohibition of cannabis and enable states to decide their own path regarding cannabis policy. DCMJ will also call on Congress to uphold the Rohrabacher–Farr amendment, which prohibits the Department of Justice and the Drug Enforcement Agency from using funds to step in or interfere with state medical cannabis laws. The demonstration will place a much-needed spotlight on the Congressional inaction and ‘delay’ in addressing our nation’s ineffective drug policies. Additionally, DCMJ will call on Speaker Ryan and Congress to remove the DC budget rider that prevents the DC government from sensibly regulating adult-use stores and cafes.

WHAT: #Reschedule420 Smoke-In on Capitol Steps (House Side)
WHO: DCMJ volunteers and cannabis legalization advocates
WHEN: Monday, April 24, 2017 High noon to 4:20 p.m.
WHERE: Eastside of Capitol on the House steps side of Capitol, Washington, D.C.
*Note: Media interested in videotaping DCMJ rolling joints for the congressional giveaway should send an email to Press@DCMJ.org to schedule an appointment.

“Congress and Speaker Ryan can’t afford to ignore the vast majority of Americans, who want to end cannabis prohibition—so we are headed to Capitol Hill to finally have our issues heard,” said Adam Eidinger, co-founder of DMCJ. “Congressional inaction and leaving harmful laws on the books isn’t anyway to run a government—it is irresponsible. Arbitrarily respecting states rights and walking all over DC’s isn’t setting at the bar very high either. Speaker Ryan and others members of Congress need to stop hiding behind the special-interest smokescreen preventing responsible cannabis laws from being enacted. If these members of Congress ask themselves, who has the most to lose from ending the war on cannabis—it isn’t the American people.”

DCMJ will ask lawmakers to entirely remove cannabis, a plant far less harmful than alcohol and tobacco, from a Schedule I classification under the Controlled Substances Act. Today, Congressional inaction has left tens of thousands of individuals incarcerated, stripped millions of Americans of their right to vote, left otherwise law-abiding citizens with burdensome criminal records, and patients & veterans without access to alternative life-saving treatments that have been known to improve overall quality of life.

Protect DC and States Rights
In November 2014, DCMJ-backed Initiative 71 passed by 70 percent of DC voters. Even before Initiative 71 passed, the Council of the District of Columbia proposed a framework, which was approved to regulate the legal sale and taxation of cannabis, which would have enable DC to sensibly regulate adult-use cannabis. However, Representative Andy Harris (R-Md.)—who has long opposed DC’s independence and unsuccessfully worked to block DC’s decriminalization of cannabis—worked to sneak in a ‘rider’ as part of a deal to avoid a government shutdown. The Harris rider has prevented the DC government from spending any of the District’s locally-raised funds to regulate adult-use stores and cafes. This has resulted in the loss of millions of tax dollars, and potentially thousands of jobs.

High Personal Costs and A Waste of Tax Dollars
While some states have implemented responsible cannabis laws, others have decriminalized possession of small amounts of cannabis, and other states still make cannabis possession a misdemeanor or even a felony. Data shows that current our laws are enforced in racially biased ways. Coupled with enforcement issues and a system that coerces guilty pleas, the consequences can be devastating for individuals charged with cannabis ‘crimes.’ The loss of a job, the right to vote, court fines, and other penalties, along with the stigma of a conviction when trying to secure work, an apartment or home or accessing benefits and other programs can be devastating to individuals and their families. Additionally, the cost to identify, arrest, prosecute, sentence, incarcerate, and supervise people for cannabis possession are tens of millions of tax dollars that could be better spent.

Support for Ending Cannabis Prohibition Has Never Been Higher
According to an October 2016 Gallup poll, American support for legalizing cannabis is at 60 percent, the highest it’s been in 47 years, and a 2015 Harris poll found a staggering 81 percent of Americans support legalization of cannabis for medical use. Seventy-one percent of Americans across party lines and age groups oppose a federal crackdown on state-legal programs. Today, there are 29 states and the District of Columbia that have chosen to create regulated cannabis programs, including four of the five most populated states in the nation. More than 20 percent of the U.S. population lives in states that allow adults 21 and older to legally consume cannabis, and more than 60 percent of the population lives in a state where medical cannabis access is legal.