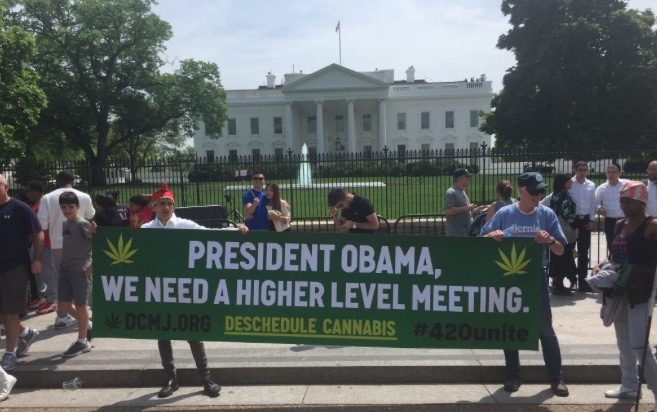 We would like to sincerely thank you and your staff for the assistance in helping DCMJ take meaningful first steps towards an open and honest dialogue with your administration regarding the serious need to de-schedule cannabis as a Schedule 1 drug under federal law– a classification reserved for lethal drugs considered to have no medical value such as heroin.

Today, more than half of the country has enacted medical cannabis laws. Four states and the District of Columbia have also passed laws to make adult cannabis use legal and several more states will vote on cannabis ballot initiatives this November.

States, one-by-one, are standing up against unconstitutional laws like the Defense of Marriage Act (DOMA), which defined marriage as the union of one man and one woman, and allowed states to refuse to recognize same-sex marriages granted under the laws of other states. Prior to being ruled unconstitutional, DOMA followed a very similar pattern like various cannabis ballot initiatives. Just like we saw with DOMA, we know more states are working to take an important stance against failed and unconstitutional drug policies of the federal government.

It is important to look at the facts regarding how our nation’s failed cannabis policies harm Americans:

While we are appreciative of your administration’s initial effort to take steps to begin an open dialogue with the cannabis community and its organized constituents, we would like a formal commitment from your administration to continue this conversation and are requesting:

Given the compelling and staggering facts as to why these failed cannabis policies harm Americans, we are sure you can understand why we cannot tolerate your inaction on these important issues any longer. We simply cannot stand on the sidelines and watch while everyday more Americans are harmed by what is clearly racist and unconstitutional failed drug policies. This is why we are requesting a formal response regarding the above from your administration before May 20th.

Otherwise, on Friday, May 20, Harry Anslinger’s 124th birthday— a staunch supporter of prohibition and the criminalization of drugs, who played a pivotal role in cannabis prohibition—DCMJ will gather in front of the White House for another “Deschedule Marijuana” demonstration with non-violent civil disobedience. We feel compelled to do this as a symbolic message of solidarity on behalf of the tens of thousands of medical patients denied safe access to cannabis and the additional tens of thousands of Americans, who are rotting behind bars due to cannabis criminalization.

“There are 100,000 total marijuana smokers in the US, and most are Negroes, Hispanics, Filipinos, and entertainers. Their Satanic music, jazz, and swing, result from marijuana use. This marijuana causes white women to seek sexual relations with Negroes, entertainers, and any others.”

“…the primary reason to outlaw marijuana is its effect on the degenerate races.”

“Marijuana is an addictive drug which produces in its users insanity, criminality, and death.”

“You smoke a joint and you’re likely to kill your brother.”

“Marijuana is the most violence-causing drug in the history of mankind.”

You should understand our protests are not just for medical research into cannabis, but ending cannabis prohibition once and for all. You have the opportunity to heal the national wound of unjust cannabis policies that have always targeted minorities, hurt patients and corrupted policing in America for nearly 80 years.

If we do not hear back from you regarding the above meeting request, we also plan to highlight the racist views justifying marijuana prohibition which are more current than Mr. Anslinger at our demonstration. We will play recordings at the protest of President Richard Nixon’s xenophobic comments made while inside the White House. For example, we intend to play a recording of President Nixon saying the following:

“I mean one {a new bill} on marijuana that just tears the ass out of them. I see another thing in the news summary this morning about it. You know it’s a funny thing, every one of the bastards that are out for legalizing marijuana is Jewish. What the Christ is the matter with the Jews, Bob, what is the matter with them? I suppose it’s because most of them are psychiatrists, you know, there’s so many, all the greatest psychiatrists are Jewish. By God we are going to hit the marijuana thing, and I want to hit it right square in the puss, I want to find a way of putting more on that.”

Our protest will ask if the 5 million Americans that were arrested for marijuana during your time in the White House went to jail for Anslinger and Nixon’s bigotry or your indifference?

At DCMJ’s April 25, 2016 meeting with ONDCP, there were 20 empty chairs in the room that could have been filled with additional cannabis stakeholders for a meaningful and open conversation with the your administration. It’s clear that the time has come to expand the conversation. You simply were not willing to let bad policies like DOMA to be left to the states to sort out. Why should cannabis reform be any different? Now is the time for you to call cannabis prohibition a bad policy that was formed by propaganda, is unjust, un-American and extremely racist in its enforcement, even in 2016.

DCMJ looks forward to hearing from you and continuing this important dialogue with your administration—behind open or closed doors. We fully realize that continuing this conversation is vastly more effective than more demonstrations, but we need a commitment from you to keep talking. Otherwise, you should be aware that this movement has no plans on stopping protests— just like those who knew it was the right thing to not stop until DOMA was overturned.

We appreciate your administration’s consideration of continuing a sensible dialogue as well as hosting a cannabis summit with key stakeholders before you leave office.