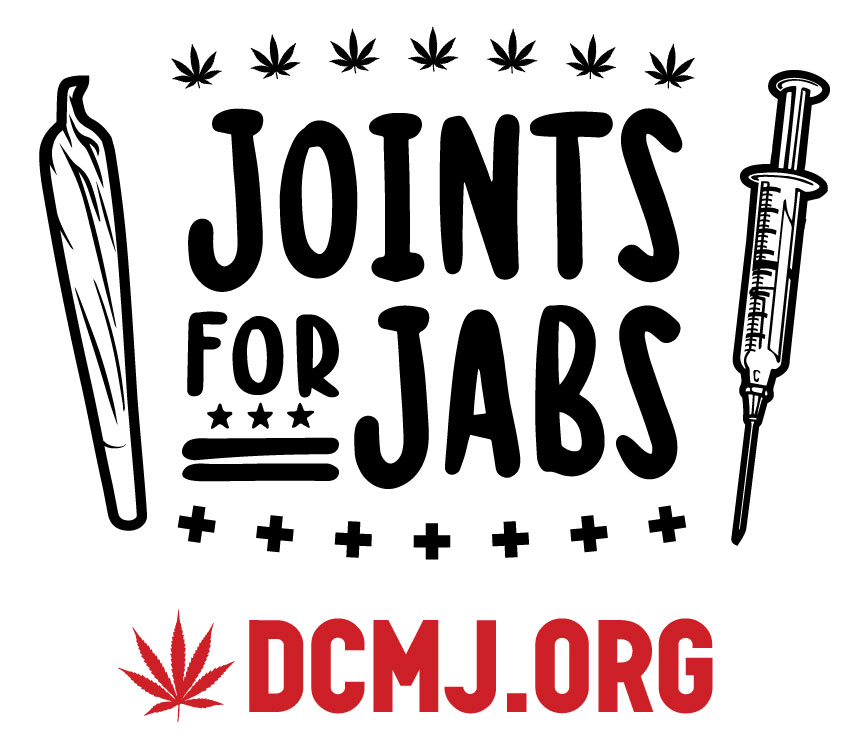 buy viramune online uk WASHINGTON, DC – Like many groups across the United States, DC Marijuana Justice (“DCMJ”) discontinued its regular in-person meetings when the coronavirus pandemic began last year. Without a safe way for citizens to publicly gather to advocate for reforming the cannabis laws in the District of Columbia, DCMJ is excited for the vaccinations to be widely available. Mayor Muriel Bowser’s recent announcement of forthcoming coronavirus vaccines is welcome news to DCMJ. To celebrate this momentous occasion and thank people for getting vaccinated, dozens of DC homegrowers will lawfully distribute free bags of cannabis outside vaccination centers as soon as the general public is able to get vaccinated.

Dubbed “ Joints for Jabs,” a play on the jab of a vaccine injection, this community effort aims to highlight the need for further local and national cannabis reform while also advocating for equitable distribution of the critical vaccine. DCMJ notes that to safely share a cannabis joint without potentially contributing to the spread of the coronavirus that causes COVID-19, each user must be vaccinated–an objective that necessitates accessibility for all District residents. The District of Columbia’s Department of Health has not yet named the public vaccination sites, but upon their identification DCMJ will issue a follow up to this release providing each ‘Joints for Jabs’ location, dates, and hours of operation.

“We are looking for ways to safely celebrate the end of the pandemic and we know nothing brings people together like cannabis,” says DCMJ co-founder Nikolas Schiller. “DCMJ believes that cannabis should be consumed safely and responsibly, and the pandemic has made this incredibly difficult for many adults to share their homegrown cannabis. When enough adults are inoculated with the coronavirus vaccine, it will be time to celebrate – not just the end of the pandemic, but the beginning of the end of cannabis prohibition in the United States.”

During the pandemic cannabis dispensaries have been considered essential businesses. However, due to a patchwork of state laws and a lack of federal action, millions of Americans still source cannabis from the underground economy, which has varying degrees of quality and safety. As homegrowers, DCMJ members gifting cannabis will only share cannabis grown free of pesticides and synthetic fertilizers.

DCMJ does not anticipate that enough citizens will be inoculated with a coronavirus vaccine by the time President-Elect Joe Biden is sworn in on January 20, 2021 to safely hold a joint giveaway. More importantly, assuming the pandemic has subsided President-Elect Biden has indicated there will be a summer Inauguration event on the National Mall as is traditionally done in January.

On January 20, 2017, at the Inauguration of President Donald Trump, DCMJ organized a massive cannabis distribution demonstration called “#Trump420.”  The wildly popular protest to end marijuana prohibition highlighted the fact that cannabis reform is not a partisan issue, but an American issue that needed to be addressed by the incoming president.  Thanks to local, national, and international media attention, by 10:00 AM a line of cannabis reform advocates stretched over 6 blocks long, and by the end of the day over 10,000 cannabis joints were given away to adults of all political persuasions.  Unfortunately, nearly four years later, cannabis remains illegal under federal law.

In 2020, the House of Representatives passed historic legislation called the Marijuana Opportunity Reinvestment and Expungement Act (“MORE Act”). This legislation would remove cannabis from the Controlled Substances Act and enact various criminal and social justice reforms related to cannabis, including the expungement of prior convictions. However, the Senate did not take up this important legislation in the remaining days of the 116th Congress.  DCMJ expects that the MORE Act will be introduced and passed in the 117th Congress and hope Democratic leaders take action quickly.

“While no legislation is perfect, the MORE Act addresses many demands that DC Marijuana Justice has been making for years,” says Adam Eidinger, proposer of DC’s Initiative 71 and co-founder of DCMJ.  “We asked Presidents Obama and Trump, and now we are asking President-Elect Biden to take executive action on cannabis reform within the first 100 days.”

Since its founding in 2013, DCMJ has led the nation in creative and high-profile cannabis reform activism. After introducing and passing DC’s Initiative 71 in 2014, which voters legalized the possession and cultivation of cannabis, DCMJ organized three large seed giveaways that provided all adults & Congressional staffers the means to grow cannabis for themselves, deployed giant 51′ inflatable joints outside the White House, the 2016 Democratic National Convention in Philadelphia, Times Square in New York City, the 2016 Presidential Debates, and Boston’s Freedom Rally, as well as distributing over 10,000 joints of District of Columbia homegrown cannabis at the Inauguration of President Donald Trump, and most recently, attempting to distribute 1,227 joints at the congressional “Joint Session” in 2017, where U.S. Capitol Police unlawfully arrested seven DCMJ activists (All charges were dropped the following day).  In 2018 and 2019, aligned organizations MDMJ, VAMJ , and COMJ, were formed to advocate for cannabis reform in Maryland, Virginia, and Colorado. DCMJ demands cannabis be removed from the Controlled Substances Act and all Americans are given the right to grow cannabis in the safety and privacy of their homes.