dla singli katowice WASHINGTON, DC – On Tuesday, April 2, 2019, cannabis reform advocates from DC Marijuana Justice (“DCMJ”), Maryland Marijuana Justice (“MDMJ”), and Virginia Marijuana Justice (“VAMJ”) will descend on Capitol Hill to lawfully give away cannabis seeds to members of Congress and their staff, 21 years of age and older. The action is to call for cannabis consumer-friendly legislation that permits adults to grow cannabis in the comfort and privacy of their homes & backyards.

“As full legalization & descheduling of cannabis approaches cannabis consumers & medical patients must be able to travel throughout the United States without fear of arrest, detainment, or harassment,” says Dawn Lee-Carty, Founder of Speak Life, a mom and founder of Speak Life, an organization dedicated to educating parents and legislators on the benefits of cannabis. Ms. Lee-Carty came to advocate the use of CBD, a non-psychoactive chemical compound found in cannabis, and THC after pharmaceuticals failed to adequately treat her epileptic 11 year old daughter. Due to the federal prohibitions on cannabis, Ms. Lee-Carty cannot travel with her daughters medicine.

After voters in the District of Columbia approved Initiative 71 in November 2014 and Congress approved the law in February 2015, all adults aged 21 years of age or older can legally grow & possess small amounts cannabis in the District of Columbia. With the annual spring planting taking place after the last frost in late April, the “Congressional Seed-In” aims to help members of Congress and their staff lawfully start their cannabis gardens in the District of Columbia. Outdoor cannabis requires cannabis to be grown in cycle with the seasons, so a timely spring planting is integral to the success of the crop. However, not every American is afforded the right to grow their own cannabis. Instead many Americans are forced to buy their cannabis from dispensaries, which costs as much as 10 times more than home grown cannabis.

“The only legislation we see in the 116th Congress moving is backed by lobbyists to deal with business interests,” says Adam Eidinger, Proposer of Initiative 71 . “We’re going up to the Hill to encourage members of Congress and their staff that they represent more cannabis consumers than cannabis businesses. We want to legally grow cannabis as a basic right and this is frankly more important to me than access to banks or tax reform for huge marijuana businesses,” adds Edinger.

WHO: Members of DCMJ, MDMJ and VAMJ, expert growers, and cannabis reform activists
WHAT: “Congressional Seed-In” – A Seed Giveaway for members of Congress and their staff
WHEN: April 2, 2019, 11:00 am until 4:20 pm – Ending Rally Near Capitol Steps on East side
WHERE: All Congressional Offices in Washington, DC
WHY: Citizens demand meaningful legislation that fully ends prohibition cannabis cultivation for every adult and allows the movement of cannabis between all States.

“I don’t want cannabis grown using nuclear or coal power. I want it grown using natural sunlight. The current system of using costly warehouses to grow cannabis plants under synthetic light using synthetic chemicals is bad for consumers and bad for the environment. There is a better way,” says Ms. Lee-Carty, who currently grows using LED technology, but would prefer to grow her daughter’s cannabis outdoors..

“The age of utilizing expensive warehouses to grow cannabis is a relic of prohibition and DCMJ & MDMJ believe that cannabis should return to the fields from which it was formerly grown,” says MDMJ co-founder Kris Furnish. “Congress and state leaders have been standing in the way of cannabis consumer friendly reform, while poll after poll show that the American public fully supports the full legalization of cannabis, including home grow.

ABOUT DCMJ
Since its founding in 2013, DCMJ has lead the nation in creative and high-profile cannabis reform activism. After introducing and passing ballot initiative 71, which legalized the possession and cultivation of cannabis in the District of Columbia, DCMJ organized two large seed giveaways that provided all adults the means to grow cannabis for themselves. Since then DCMJ has deployed giant 51’ inflatable joints outside the White House, the Democratic National Convention in Philadelphia, Times Square in New York City, the 2016 Presidential Debates, and Boston’s Freedom Rally, as well as distributing over 10,000 joints of District of Columbia home grown cannabis at the Inauguration of President Donald Trump to most recently, attempting to distribute 1,227 joints at the congressional “Joint Session” in 2017, where U.S. Capitol Police unlawfully arrested seven DCMJ activists. All charges were dropped the following day. The “Congressional Seed-In” is DCMJ’s fourth annual “Reschedule 4/20,” day of action to highlight the need for meaningful cannabis reform legislation in the United States. In 2018 and 2019, aligned organizations MDMJ & VAMJ were formed to advocate for cannabis reform in Maryland and Virginia. 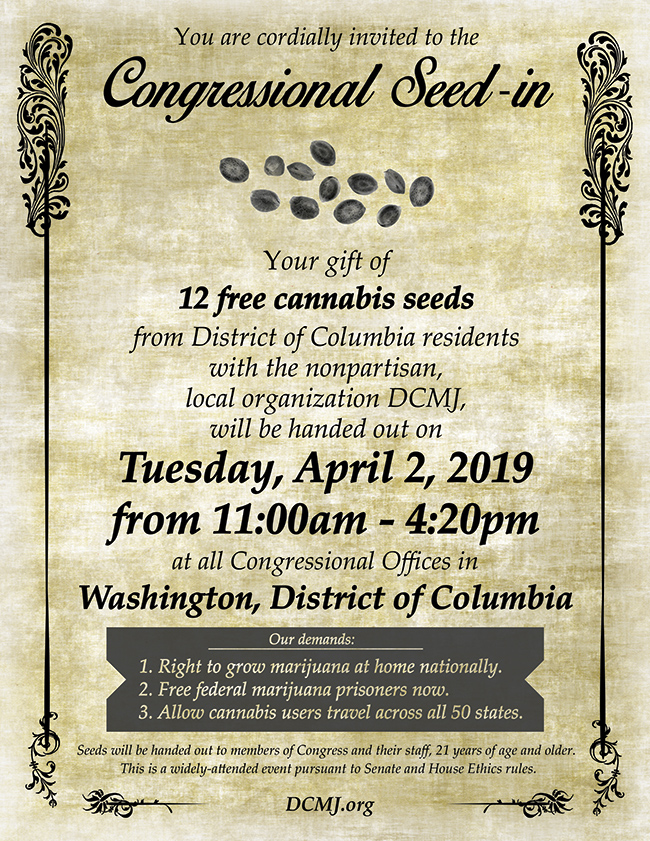